The second world war, the largest in all of history, shaped nearly every aspect of our modern world. Our economy, our infrastructure, our politics; all were shaped by this single cataclysmic conflict. More so than any before it, World War 2 was a war not just of guns and soldiers, but one of innovation and production.

The industrial might of every nation in the world was tested, to the point where many historians argue that the war was won as much by machine shops as by machine guns. Let's take a look back at perhaps the most important moment in machining history—how machinists helped win WW2.

The calm before the storm

Like many industries, the machine tool business was crippled by the great depression. The biggest strength of machining shops has always been their versatility. Most machine tools can be rigged to do all sorts of work, so if, say, the automotive industry is in decline, a shop can pivot and cater to oil and gas. The real problem arises, then, when every industry is in decline. Shops around the country were closing in droves near the beginning of the depression, another victim of the economic chain reaction ravaging American industry.

The first ray of hope came as FDR rolled out his new deal policies to reignite the failing economy. Many benefits were given to factories, and a lot of the large infrastructure projects Roosevelt started required heavy machinery and vehicles to be produced, so machining was able to bounce back somewhat, if not to its former peak.

However, this gradual recovery was not to last—war was on the horizon. In 1938, sensing America’s inevitable involvement with the brewing conflict in Europe, Cincinnati Milling ramped up production, despite the current recession. Many other manufacturers and shops began preparing in the years leading up to America’s entry into the war, standing ready for the day their country would need them. 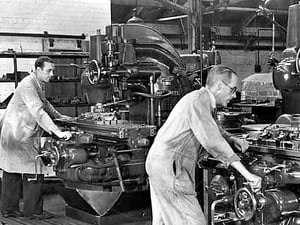 That day came on December 7th, 1941, when the Japanese military attacked the US navy base on Pearl Harbor. A nation in shock was plunged suddenly into the greatest war it had ever partaken in, but the machine shops were ready to pick up the slack. War production ramped up fast, and thanks to the preparation of manufacturing companies, more lathes, mills, and grinders were produced in 1942 than in in any year prior. In fact, the years between 1940 and 1943 saw more machine tool production than the preceding forty combined.

Used machine tools from many of the companies that helped in the war effort are still floating along today. Now under the name Milacron, the aforementioned Cincinnati Milling Company was instrumental in the war effort. Kingsbury and Bridgeport were also major machine tool manufacturers during the war. Over 100,000 Bridgeport turret mills ended up sold before the war was over. In contrast to the versatility of the pre-war era, Many manufacturers instead focused on producing increasingly specialized tools that could quickly and efficiently manufacture the weapons and vehicles needed overseas.

Backed by these machine tools, the USA was able to mobilize perhaps the most successful industrial war effort in history. They manufactured over 300,000 planes, 100,000 tanks, and 2,000,000 machine guns. The titan of manufacturing that the US became was one of the key factors in the Allied victory, and none of it would’ve been possible without thousands of hard working machinists, fabricators, and manufacturers.