Haas vs Mazak: Pros and Cons of Budget CNC Machinery

If you're active in the CNC machining community to any degree, you've likely heard the names Haas and Mazak tossed around a lot. They are two juggernauts of the industry, each taking up huge shares of the market and each producing many of the same types of machine tools. As such, to an outside eye the frequent debate between them may seem a simple matter of preference and brand loyalty, like Coke and Pepsi. However, it goes deeper than that.

When people discuss the pros and cons of Haas and Mazak they are talking about the brands and their machines, yes, but they're also talking more broadly about two different niches of machine tools. You see. Mazak is one of the several large Japanese and Korean manufacturers of high end machinery, whereas Haas is the most known of the more affordable, typically American brands. The debate between the two, then, is a question of investment and value. Is it worth it to save money on a Haas, which may have a slower output and break down more frequently? Or is it worth it to fork over a little extra cash for the sturdiness and speed of a Mazak? Obviously the answer is going to vary a bit depending on your situation, so we're going to give a general overview of the benefits of each. 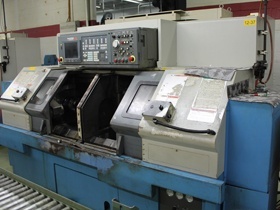 As stated before, the Mazak machines are, simply put, better machines. They can cut harder materials more precisely, require less maintenance, and are far more efficient when operated at maximum capacity. For larger operations, picking a Mazak (or other high end Japanese manufacturer) is a no-brainer, that's exactly who these machines are made for.

Probably wasn't made with a Fadal.

That doesn't necessarily mean smaller shops should rule it out though. While it is higher in upfront price, when properly utilized the return on investment could be much higher than an equivalent Haas. Especially when working with harder materials, a Haas is going to break down far more often, and repair costs can quickly rack up. In addition, the increased efficiency means that you're going have a higher output, which assuming you are running a professional shop is going to bring you better earnings—the price difference can pay for itself. 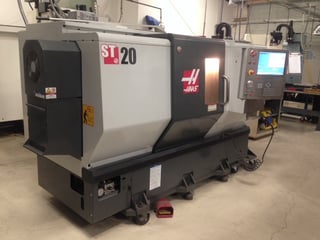 So judging by the previous paragraph, the impression may seem that a Mazak is the clear superior choice if you can float the bill. On paper, that's probably true, but as anyone knows, what's true on paper isn't always true in practice. Mazak CNC machinery is, simply put, a lot harder to use. Honestly assess your skills and the skills of your workers; the extra time spent on programming a high end machine could completely negate its efficiency.

The increased efficiency is also only notable if you are actually pushing the machines to their fullest. Assuming you're not pushing your equipment in terms of materials, precision, or speed, you may not reap much benefit from the higher end tool. The affordable price of Haas has also made it popular choice for small shops, meaning there are a lot of used Haas machines, and more importantly machine parts, in circulation. Speaking of parts, Haas is an American company, and its popularity means that you should have no trouble finding parts wherever you live, whereas finding replacements for a Mazak can be more difficult, be it through official channels or second hand.

Clearly this isn't a hard set either or, and your decision doesn't have to be either. Many small shops start using Haas machines, then try out more expensive brands as they take on more heavy duty projects. Others find that the reliable workhorse nature of a Haas is enough to more than justify the price. Ultimately the choice comes down to what you're trying to do and what your limitations are. Ask other machinists running similar operations, look into the specific machine you're purchasing (certain models from certain brands are known to be more temperamental), and ask any of your workers what their experience is. It's not a decision to make lightly, but both brands, and the niches they represent, manufacture fine machines for the needs they fill.